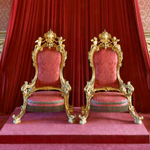 The Ajuda National Palace was the official royal house in the second half of the 19th century. It presents authentic interiors and important art collections.

The Ajuda National Palace is a neoclassical building from the first half of the 19th century.

It became a royal residence on king Luís I accession to the throne and it remained as such until the end of the Monarchy (1910).

It still holds its decorative artworks in place in a lively and truthful to its origins display.

On the ground floor, from the Music Room onwards, the private apartments can be found, while State Rooms occupy the upper floor.

As a museum, it gathers important collections of decorative arts from the 18th and 19th centuries: gold and silver works, textiles, furniture and ceramics as well as paintings, sculptures and photographs.

The most important State ceremonies held by the President of the Republic still take place here. geral@pnajuda.dgpc.pt

Please log in to be able to send messages to the listing owner.